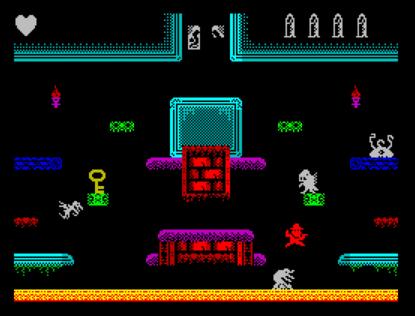 The Story so far

The primal horrors have awoken! The entire cosmos is destined to be consumed in unspeakable despair while humanity is powerless against beings who defy the rules of the Universe itself. Or is it?

Our only hope rests in the hands of a single individual. With just his trusty Colt, guts of steel, no sanity remaining and an uncanny resemblance to the late Charles Bronson, he alone will rise to the ocassion and prove his worth against monsters feebler minds are unable to comprehend.

Lovecraft Mythos is a survival platformer. Collect 9 keys to advance to the next screen, trying to avoid the eldritch monsters which will continuously respawn around you. Shooting a monster will kill it instantly, but be wary of the limited ammo. Try to conserve it as much as possible.

You can only survive a limited number of hits, represented by the hearts at the top left corner. Every time you clear a screen, your remaining life and ammo will be restored. In addition, the game will always start at the last screen you reached. Progress through the 8 existing screens to win honor and glory, which will be useless because the game will start again from the first screen and you'll die anyway.

Use the cursor keys (6, 7 and 0), the default controls (Q, A, SPACE) or the selected joystick to navigate the main menu.

You can redefine the controls keys, but the defaults are as follows:

The game supports a number of joystick interfaces, with Kempston being selected by default. Two-buttons Kempston joystick are supported if your interface allows it (useful for Megadrive control pads), with the second button doubling up as jump.

Game score is collected and summarized every time you finish one level.

You get 1 point for each second you survived, plus extra points for each monster you kill, according to the table above. You'll lose 15 points for each impact you received in your playthrough, though.

If you are bored, you can always try to call your favorite mythos God to help you. Most of them will ignore your call, but a few of them may grant you cheats or other special effects.

Pay close attention to the scoring screens. If you call a God who watched you as you finished a level, the game will continue from the level after it. This way you can continue your progress after you reset your Speccy.

Bug notes, feedback and overall ramblings are always welcome. Send your inquiries to:

Thank you for playing!